An East Cleveland swimming coach who has dedicated much of the last 30 years to helping youngsters make a splash in the water has been honoured with a Teesside Hero award.

Barbara Wilkinson set up the Loftus Dolphins club with her husband John in 1988 and coaches in a voluntary capacity five nights and three mornings a week, two of which begin at 6.30am.
The club – which has 60 swimmers aged six to 18 – has grown from humble beginnings to become one of the most successful swimming outfits in the Teesside area under Barbara’s guidance.

And its 30th anniversary year is shaping up to be its most successful yet.

The club will have 12 of its number competing in Scotland in December, while Loftus swimmers are on various England and regional talent and performance programmes.

Barbara also coached at North-East and Swim England talent camps this season – and her tireless devotion to her club and swimming in the area has now been rewarded with a Teesside Hero award from charitable movement Teesside Philanthropic Foundation.

One of the charity’s patrons, Nigel Willis of Redcar-based First Choice Labels, handed over Barbara’s award in a surprise presentation at Loftus Leisure Centre after she was nominated by 18-year-old swimmer Sean Armstrong. 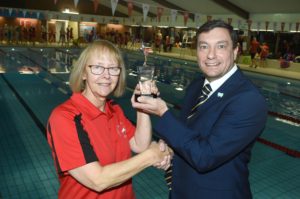 Originally a gymnastics coach before deciding to join her husband poolside, Barbara, 68, received a cheque for £1,000 which she will use to buy new equipment for the club. She also received a meal-for-two voucher for Middlesbrough charity restaurant The Fork in the Road.

Nigel said: “It’s wonderful volunteers such as Barbara who work tirelessly and most often without any recognition to produce the Team GB stars of the future.

“Every Aimee Willmott, Amy Tinkler and Stewart Downing started out at a local club run by enthusiastic volunteers who are led by wonderful people like Barbara.”

Barbara said: “It’s absolutely amazing to be recognised, and to be put forward for an award by one of our young swimmers who has been with us since he was about nine means a lot.

“The money comes in very handy as well, because we are a voluntary club and rely on the fees we get from parents.”

Barbara retired from her day job in 2008 after 13 years working as a secretary at Danby Church of England Primary School.

And although she admits she is probably now busier than ever writing training programmes as well as coaching for Loftus Dolphins, she wouldn’t have it any other way and plans to continue for as long as possible.

“When you retire from your paid job you have more time on your hands, and I just absolutely love coaching – if I wasn’t doing it I would only have to do more housework,” Barbara joked.

“It just gives you so much satisfaction seeing a young swimmer who has joined you when they are seven or eight improving and competing in national championships 10 years later.

“I do get really tired sometimes when we have a long three-hour session, but we have a good team at the club and I enjoy it too much to retire – and I’m sure we could get a wheelchair by the pool anyway!”