Big success for the seventh Festival of Thrift

People came, they saw and they thrifted in their thousands at this year’s Festival of Thrift.

The award-winning annual celebration of sustainable living saw 37,000 visitors attend the event at Kirkleatham, near Redcar over the weekend of 14 – 15 September. 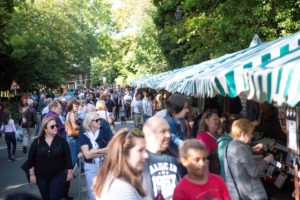 Ahead of the main event, on Friday 13 September, crowds lined the streets of Redcar to welcome in this year’s festival at the opening parade. Called ‘A Breath of Fresh Air, it featured performers from the local community and ended with a dance performance where Kasia Molga’s unique Human Sensor costumes took centre stage, relaying a powerful message about pollution.

A festival that places art at its heart, the Festival of Thrift weekend offered a wide range of performances, workshops and lively talks and debates on environmental and sustainability issues, including Tees Valley Nature Partnership’s World Café and a thought-provoking discussion about the role of plastic. 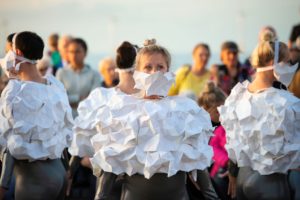 This year is the seventh outing for the Festival and its main themes for 2019 were clean air and the moon landing anniversary, which were marked in a number of shows and activities. 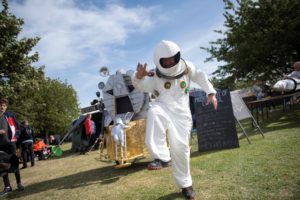 The site’s cycle hub was popular with visitors who had travelled to the site by bike and was also the venue for an unusual workshop where families built rockets out of reclaimed wood.

Emerging and established musicians were part of the line-up on the SABIC main stage and included performances by the Mighty Redcar’s Dylan Cartlidge, the Lulas and Tyneside rapper Kay Greyson. 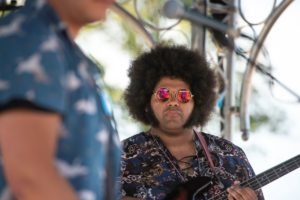 Visitors got hands-on at workshops offering a range of skills, from spoon carving, to lampshade-creating and wild baking to print-making.

Food-lovers tucked into a wide array of cuisines from independent food traders across the site and the festival’s The Town is the Menu served up an inventive al fresco menu created using perfectly good waste food and wonky fruit and vegetables that celebrated 900 years of Guisborough’s history. 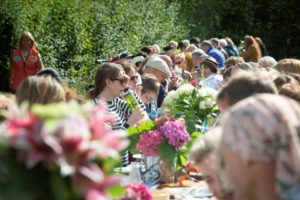 Combatting fast fashion was the central message of the festival’s fashion show, Oxglam, where costumes were upcycled and created by volunteers in partnership with Oxfam Darlington and Teesside University’s fashion department, to reflect the festival’s themes. 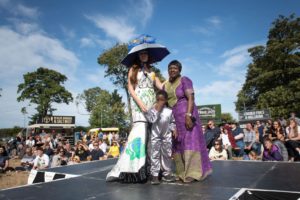 Throughout the site, small businesses and traders across the region did a roaring trade in upcycled, recycled and sustainable goods.

Festival of Thrift director, Stella Hall, said the weekend had been a huge success.

“It’s been another magnificent weekend where important messages about sustainability have been communicated with a light touch and a lot of fun. Visitors of every age from across the UK have come along and had a wonderful time at this national event that is now firmly rooted in Redcar.

“It’s been hugely enjoyable and we can’t wait to do it all again next year!” 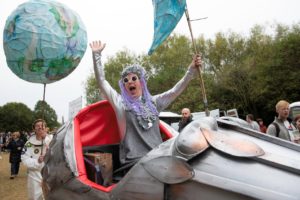 Although the Festival weekend is over, the event’s wider VIEWPOINTS programme is still ongoing.

Running until Thursday 19 September, it offers a display of artworks focused on the theme of clean air that are located across the Tees Valley and include a lung cleaning station, colossal canaries, pavilions where people can

‘Sit, Stop’ and art made with pollution.

The Thrift team is keen to hear your views on how to improve the festival in the coming years. Make you views known online now.

Further information about VIEWPOINTS by Festival of Thrift is available online.

register to hear news about next year’s Festival of Thrift