Tickets for a unique outdoor dining experience that takes its inspiration from 900 years of local history have gone on sale for this year’s Festival of Thrift.

A limited number of places are available for one of two daily sittings of the Festival’s popular ‘The Town is the Menu’ al fresco feast on Saturday 14 and Sunday 15 September in the woodland surroundings of the event’s Kirkleatham base. 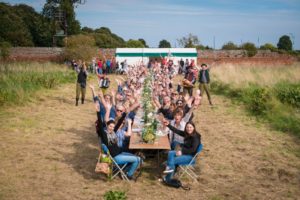 ‘The Town is the Menu’ will this year put Guisborough on a plate with a signature menu inspired by this unique Teesside town.

Diners will be treated to a truly one-off menu and some culinary time-travel, mixing references to some of the historical highlights of Guisborough, which is celebrating 900 years of history this year at its renowned Priory, as well as the modern day people and the stories of the town, which is just along the road from the festival site.

The meal begins with guests following a tradition undertaken by monks of using a herbal hand bath of rosemary and lavender infused water, both of which have disinfectant properties. 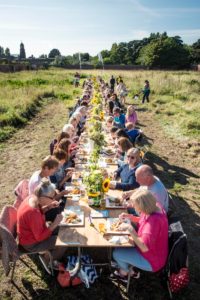 The first course is an extensive sharing platter to represent the remarkable community spirit of the town with ingredients chosen to represent early Guisborough and particularly what the monks may have feasted on at the Priory, but with a modern twist and some later influences from the 12th to the 19th centuries.

People will tuck into a wide-ranging spread of vegetarian dishes carefully chosen to reflect the history of the area including ingredients like pickled Lincolnshire marsh samphire, cured hens egg, fennel bulb, fronds and seeds as well as sorrel and lovage, raw turnip top salad and local cheese with membrillo (quince paste).

This will be accompanied by shared platters of loaves of locally-baked rye bread, as a common old grain, which will allow the symbolic ‘breaking bread’ between guests as monks would have done.

Simon Preston, the Festival of Thrift’s food guru, who has created the project, said that an impressive level of research was undertaken to create the menu. 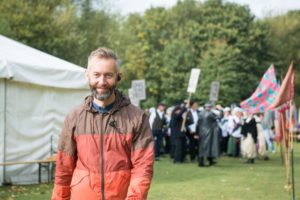 “By talking to Guisborough townsfolk from all walks of life we’ve uncovered some really wonderful and fascinating stories that illustrate what a special and unique place it is. Local people from Gisborough Priory, the DeBrus historical group, Kindred Arts

Festival and Town Pride have all contributed. Inspired by these stories our chefs Sammy Coxell and Jess Miller have created a stunning menu that truly puts Guisborough on a plate.”

The second course takes on some more modern elements and is based on Guisborough’s industrial heritage.

It features Leek Tart with Braised Swede Chips and Gravy, the swede providing a colour to represent the town’s ironstone industry, ‘chips and gravy’ is a nod to the influence of neighbouring Yorkshire, which can be heard in the colloquialisms of the town. 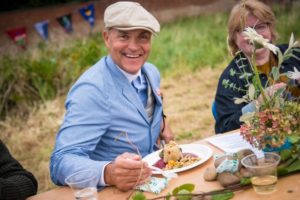 Simon added: “The tart will have four circles on top to look like a button to represent Guisborough’s imposing former Burton’s shirt factory which still connects so many local people.”

The third course brings diners bang up to date and is focused on current and future events as well as the environment and countryside.

Fig Leaf Ice Cream and Honey-Roasted Plums will be served with a borage jelly and rose biscuit. The ice cream will be presented as a slope representing Freeborough Hill, known locally as ‘Death Hill’ – an infamous sledging spot. The rose biscuit references Roseberry Topping, and honey from local producers and the restored blue lake at Guisborough woods are acknowledged by setting a blue borage flower in jelly. 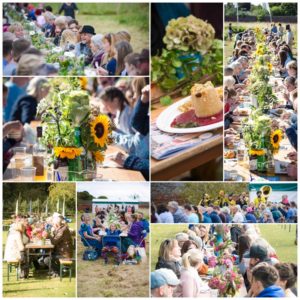 More dishes and their influences will be revealed at the Festival. The meal will be created by The Ugly Duckling, a cooking collective who produce nourishing food that is respectful of the planet, and promises a witty and seasonal feast prepared with wonky veg, perfectly good ‘waste’ food and local produce donated by Riverford Organics and Kirkleatham-based Growing in Harmony CIC.

Tickets for The Town is the Menu cost £7.00 each and early booking is advised.