Hollie is in good company

Eighteen year old Hollie Tilling from Guisborough, has just been elected as the youngest Director of the Community Interest Company (CIC), which has been formed to manage the ground floor of the soon to be re-developed Guisborough Town Hall.

Hollie, together with other students and staff from Guisborough’s Laurence Jackson School, has been involved with the project to bring the old building back to useful life from the very beginning of the concept. Together with her fellow students, she brought a critical youthful vision to planning the future use and design of this fine, ancient but neglected piece of Guisborough’s history.

Speaking of her experience as part of the planning team, Hollie said “As a board member I have learned so much about citizenship, including how to work as a team and engage in debate, sharing common ambitions, and so much more which I know will stand me well when I go to university, and in my adult life”. 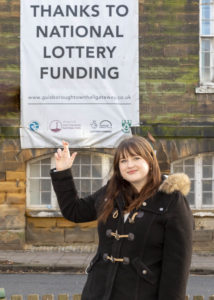 An important part of Hollie’s involvement was her participation in the production of a film recording the state of the building before restoration started. Equally important has been her role to represent the views and ideas of the youth of the town, the very people who will be responsible for the future running of the building, and its service to the town and surrounding area.

Hollie also fills the shoes of her grandfather, Dennis Teasdale, who was a founder member of the group, serving as deputy chair of the project team until his death earlier this year. Dennis was well known in Guisborough and surrounding areas, from his early working life in local government, his active role in local churches, and as a Town and Borough Councillor, being Mayor of both authorities.

Hollie feels a strong connection with the work of the project team. “my granddad was so passionate about restoring the Town Hall and had this wonderful vision as to how it would bring new life into the town, East Cleveland, and the moors, and I want to be part of his legacy. He would be so pleased that I am so involved in this exciting project”

The team of local volunteers responsible for developing the idea of restoring the Town Hall, has recently been established as a “not for profit company” in order to better develop and manage the ground floor of the building, which will become an information centre for the town, the surrounding areas and The North York Moors, serving both local and tourist needs. There will be a heritage exhibition bringing together information and exhibits from the locality, including displays provided by the local museum. There will also be a community area which will allow local groups to meet and exhibit their work.

The current pandemic has delayed the start of the renovations, but it is hoped that initial work will begin this month. The chair of the project group, Andy Murray is delighted that work is due to commence. “It has been a frustrating time for the group, and the town” said Andy. “But we have made good use of the delay by planning and designing in fine detail the ground floor of this fantastic building, which will be a great asset to the town, and the whole area.