Model and TV actress Laura Pears has added ‘businesswoman’ to her job description after opening a café in her hometown.

The 30-year-old has opened her own Eston café, D’ Dee’s, which is named after her daughters – D’ for Danielle and Dee for Dekota.

She has made the brave move after spending 11 months gaining qualifications through Redcar and Cleveland Borough Council’s Youth Employment Initiative (YEI).

The hard-working mum, who has lived in Grangetown, Whale Hill and South Bank, explained she has invested everything she has into the café and transformed a building on Eston High Street, on the town’s precinct.

“I was up until 4.20am the night before our first day and walked back in at 6.20am for an 8.30am opening,” said Laura who has previously appeared in ITV’s Vera and BBC children’s show The Dumping Ground and is about to appear in an independent feature film, “It’s been full on ever since!

“I’ve been up all hours but I don’t mind – I’m throwing absolutely everything I have into it. It’s taken a year of hard work and every penny I have and much more just to get to this stage.” 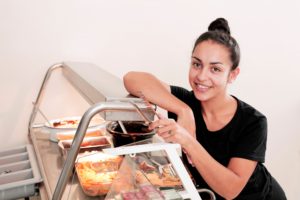 Laura, a model who has been one of the ‘faces’ of Dalton Park shopping centre in County Durham as part of a three-year, advertising campaign with an advert due to be re-released, explained she was the YEI team’s longest client.

“I had support getting lots of qualifications in food hygiene, business, health and safety, first aid, you name it. I also had great help with my business plan from Maria Lannon from support group, the Business Revolution and I’ve borrowed to get this place up to scratch. It was a right state. The builders were working on it right until the last minute.

“My YEI advisor, Craig Dring, gave me a £50 voucher for ‘exceptional progress’ which I then invested in food for the café the week after we opened and I even borrowed £30 from my sister in Portugal to ensure we were properly stocked.”

So far, the hard work is paying off. 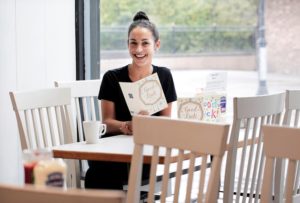 “We had customers right from day one,” said Laura, who explained she previously worked for Tom’s Café in the town for three years.

“We need permission to put out boards to help spread the word more, but there’s nothing as good as word of mouth. We have really good, reasonably priced food – all homemade on the day including the chips! – and word is getting around. We even have a Victorian Jacket Potato machine which is very popular. The vision is to have a warm, inviting, family-friendly place to come and eat alone or with friends or family and this is my passion.

“I’d like to thank Craig and the whole YEI team and the  council’s Business Growth Team for all their help. I couldn’t have got this far without them. I would recommend both teams to anyone.”

Laura, who has appeared as an extra in TV shows including ITV’s Vera, has had grants from the council’s High Street Support scheme and the Routes to Employment scheme. She has also had support from The Prince’s Trust.

D’ Dee’s Cafe is available for food catering work and can be contacted on 07565 346584. Find out more on her Facebook and Instagram sites.

Laura has signed up as a Redcar | Cleveland Ambassador. Could you join our team and help us celebrate the brilliant things about our area? Find out more about the free programme here.

If you’re aged 16 to 29 and not in employment, education or training call advisors Steph, Craig or Lorraine on 01642 771246 or email YEI@redcar-cleveland.gov.uk​