Inspiring women from across Redcar and Cleveland have received well-deserved recognition at a special ceremony.

Nearly 100 people attended the annual Inspiring Women Awards at the Wilton Centre in Redcar, as the ceremony celebrated its fifth birthday.

Taking home the Mo Mowlam Award, the main prize of the night, was Tina Jackson, who also won the Women in Leadership Award.

Tina founded The Link project in 2010 to raise the profile of children’s mental health and its effects on families, relationships, education and communities.

The Link has since become an incorporated Community Interest Company and has helped more than 500 children and young people who require emotional and mental health support every year.

“I was absolutely overwhelmed to win the Mo Mowlam Award,” explained Tina, “Mo Mowlam was a brilliant figure, so I’m incredibly proud and happy to receive this honour.

“It was such a brilliant event, everybody was grinning at the ceremony, but I really didn’t expect to win anything, so it was a big shock.” 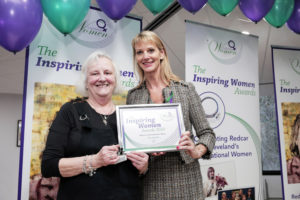 A volunteer for Footprints in the Community, a charity which helps to try and alleviate poverty and hardship in the local area, Amanda used her initiative to tackle communication problems in the local food bank by downloading a translator and creating cue cards in Arabic in order to break down language barriers.

Kendra is a volunteer for the Foundation Domestic Abuse Services after accessing the service itself eight years ago. She became involved in running the ‘Freedom Programme’ which empowers and educates other survivors on the affects and impacts of domestic abuse.

A manager at Shepherdson Court, an independent living scheme in South Bank for more than two years, Leigh has worked hard to secure more than £4,500 in grants and funding in order to help the residents of the area. Leigh also managed to secure Fair Share contracts with local supermarkets which sees food and other products being donated to those in need.

Since winning ‘Redcar and Cleveland’s Got Talent’, Rayven has performed live entertainment all over the area including the Christmas Light Switch On. She is an advocate for mental health having been a victim of bullying and donates her fees for her performances to charity. 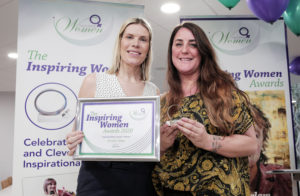 Annalice is in long term recovery from drugs and alcoholism and has used her own story and journey to set up a business helping others overcome their addictions. She supports people who can’t get into recovery and has helped people to learn how to live sustainable, healthy and sober lives.

Former winners have helped the event’s success by contributing their talents each year. Julie Donaldson, a radio presenter for Zetland FM and former Inspiring Women award winner, hosts the event, and Ruth Fox, a winner from the inaugural year in 2016, provides the catering through her charity organisation Footprints in the Community.

Joanna Andrews, a member of the vintage trip group, The Lipsticks, also performed at the event after she won an award in 2018. 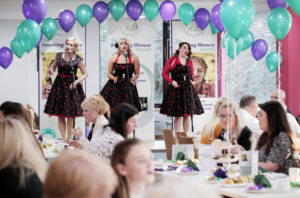 The Lipsticks perform at the Inspiring Women Awards

Ruth Fox, Chair of the Inspiring Women steering group, said: “This is such a wonderful event, and it just keeps getting better and better.

“It’s organised by a steering group of a cross-section of ladies from all backgrounds, including past winners and those in the public and private sector. Our goal is to make sure that the unsung heroes in our community are recognised for all the work that they do.

“As part of this project, we also organise work shadow opportunities for young women who are about to leave school, giving them the best chance possible for success, so I’m incredibly proud of this event and how far it has come.”

Councillor Mary Lanigan, Leader of Redcar & Cleveland Borough Council, delivered a speech at the event and said: “The council has been so proud to support this event for the past five years.

“This ceremony has recognised all kinds of women from our community – foodbank volunteers, hard-working mums, leading women in business and teenagers who are blazing the trail in their age group.

“I’d like to thank this year’s winners and to those who have gone before, they really have made our community a better place.”