All set for our latest round-up of the brilliant things going on around Redcar and Cleveland? It’s time for Friday Five.

1. Where else to start but the brilliant news from overnight?

Steel Stories, the oral history project at Kirkleatham, won the Best Small Museum Award at the Museums Change Lives Awards. It’s fantastic recognition for everyone who’s been involved in the powerful celebration of our area’s industrial heritage. Hours upon hours of research and creativity resulted in the fascinating exhibition. And if you haven’t been yet, don’t worry – it runs until April.

2. Sticking with winners, let’s hear it for the delightful Willow Cake in Loftus.

Our ambassadors were crowned the Capital of Cake for 2019 after a public vote organised by the North Yorks Moors National Park.

We spoke to Ruthy Shutt, who owns the bakery with her sister, Sal Archer.

Ruthy told us: “We’re absolutely over the moon. We came second last year and it was such a nice surprise to win.”

We're thrilled to announce the winner of #CapitalofCake 2019 is @cake_willow! We received a whopping 1,600 votes, thanks for all who voted to help crown the champions. Be sure to sample their tasty treats this #BritishFoodFortnight https://t.co/pXY5uATw3Y 🍰 🎂 🏆 🎉 pic.twitter.com/zh2IFaoy8j

It’s a true family business with Ruthy’s husband Tony and niece Chloe, 15, doing their bit. Ruthy and Sal’s sister Annette has also been busy behind the counter.

A typical day for the Willow Cake team starts at 5am with the brownies, cheese scones and signature speciality cakes ready for an influx of regular customers who visit from as far afield as Ingleby Barwick and Whitby.

“Our customers have been ecstatic,” Ruthy, from Skinningrove, adds.

The bakery’s key business customers include The Spa at Saltburn and the Broom House in Egton Bridge.

Ruthy and Sal hope to extend in the near future and are also looking to team up with the new MFC Foundation centre in Loftus.

We’ll be along for a caramel shortbread soon! 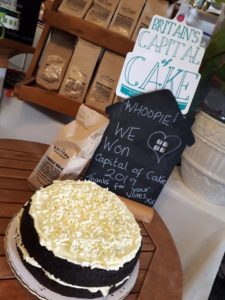 Queenie told Teesside Live: “This area is up and coming, the idea was always there, with us having the property. But we never thought we’d be capable, it was quite a big risk. I’ve absolutely loved it, I didn’t realise how exciting bar work was.”

Maisy, 20, and Queenie, 17, work as hairdressers during the day and have taken on two members of staff for the Station Road bar.

All the best to Maisy and Queenie with their new Redcar venture https://t.co/fkCscPisCR

4. Fingers crossed for Julie Donaldson from ambassadors Zetland FM. Julie’s show is nominated in the ‘Community Show of the Year’ category at the Community Radio Awards. Julie is the holder of the Female Presenter of the Year gong. Here’s hoping she can celebrate a double.

5. Finally, we hope everyone heading to the Oktoberfest meeting at Redcar Races on Saturday has a great day. Let’s hope for lots of winners…