Saltburn Pier turns 150 this year – and there’s going to be a free birthday party to celebrate on Saturday, ending with a bang as a firework display heralds the unveiling of new lighting for the famous pier.

Saturday 11 May will see Saltburn town centre and seafront come alive with family fun activities from 10am, including up to 150 volunteers in Victorian dress, a farmers’ market, screen printing workshop, antiques market, roving musicians playing sea shanties, a vintage motorcycle display, Punch & Judy, balloon modelling, the Marske brass band, an opportunity to have your photograph taken using a vintage camera and much more.

The party will end at 9.45pm with a firework display and the unveiling of new lighting for the pier using low-energy, colour-changing lightbulbs on the underside of the historic walkway.

Sarah Robson, Redcar and Cleveland Borough Council Corporate Director for Growth, Enterprise and Environment, said: “Saltburn Pier means so much to so many people that a celebration is the only way to acknowledge its 150th birthday.

“This is going to be a brilliant day, full of fun and packed with people enjoying themselves.

“We hope people will agree that the new lighting looks amazing. It’s the perfect way to mark the 150 years of our famous pier.” 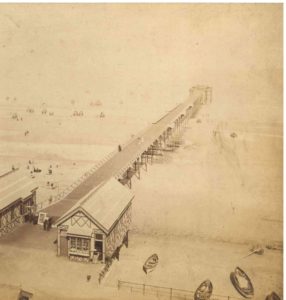 With only the vintage photography requiring a fee (£5) the celebration of Saltburn Pier is an ideal way for families to enjoy a day at the beach.

A special, one-off celebration of old time music hall fun will be held on Friday 10 May, 6.45pm, at Saltburn Community Theatre, Albion Lane.

Tickets cost just £6 and are available from Saltburn Library.

Tickets can also be reserved by emailing saltburnpier150@gmail.com. Reserved tickets can be paid for at the door, no later than 7pm, on the night of the performance.

For those interested in the history of the Pier, Saltburn Library is holding a special display throughout May including rare, vintage photographs.

Teesside Archives have also played a part with a recent project to digitise historic plans held in their collections at Exchange House in Middlesbrough. Including a number of plans from Saltburn including the Pier, the Pier Dining Room, the early layout of the resort in the

Victorian period and information on the operation of the Cliff Tramway, the digitised plans are now secured for future generations.

Teesside Archives Manager Ruth Hobbins said: “The plans of Saltburn pier are amongst tens of thousands of plans covering the local area and companies dating back to the 1800s, including those of global icons such as Sydney Harbour Bridge to local landmarks such as Saltburn Pier and Cliff Tramway. 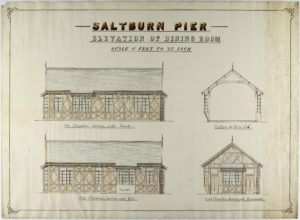 “We hope by sharing these plans with the wider public will encourage others to access our collections and help provide a unique insight into the expertise and ingenuity that went into creating these fantastic buildings. In future we hope to secure funding to make the plans more widely accessible so that more people can enjoy our area’s heritage.”

In recent years, Teesside Archives have previously helped with the renovation of the Saltburn Cliff Tramway, originally opened in 1884, by providing access to the original plans of the lift to the engineers restoring the listed structure to the glory of its Victorian heyday.

• The Saltburn-by-the-Sea Pier Company was formed in October 1867 by engineer John Anderson, who had achieved local fame by building the Alexendra Hotel on the seafront.

• Using iron from Cochrane & Grove of Ormesby Foundry, work began on 27 January 1868 when the first pile was driven by Mrs. Thomas Vaughan of Marton

• Opened to the public in May 1869, it was the first pier on Cleveland’s coast. 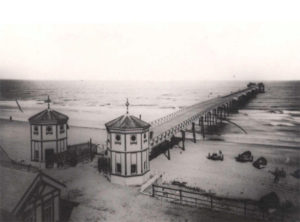 • Within six months some 50,000 visitors paid the fee required to walk the 457m length of the pier over what was then known as the German Ocean, while passengers from steamers could embark at the end of the pier and walk into Saltburn.

• Addressing the problem of visitors getting back up the seafront cliff, John Anderson created a vertical hoist, which was in turn replaced by the still-operational cliff tramway in 1884.

• Over the years severe storms and even a collision by the S.S. Ovenbeg (in 1924) led to damage to the pier and its length being significantly shortened. 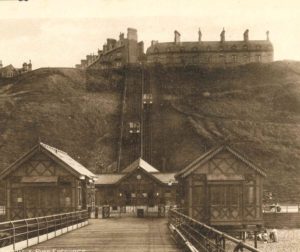 • The Friends of Saltburn Pier secured funding to restore the pier. Although shorter than it was at 208 metres, the pier remains a major tourist attraction and holds a special place in Saltburn’s economic and social life.

• It remains the most northerly pier in Britain and the only pleasure pier in the north east. 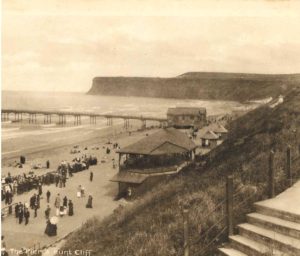