Where did January go!? With the blink of an eye the month has been and gone and we’re reflecting on another week of good news stories and upcoming events.

One of the biggest projects for Redcar | Cleveland in 2020 will come to fruition in the spring when Kirkleatham Walled Garden opens.

The latest drone footage was released earlier this week and it looks spectacular.

You can see it below.

🌱 The major transformation of the historic, Grade II-listed walled garden at Kirkleatham Estate has been captured by drone footage.👨‍🍳 Visible from the footage are the beginnings of what will be one of the region’s finest gardens, as well as the nearly-completed quality restaurant and events venue. 🌺 The gardens, which have been closed for more than 30 years, are expected to be open to the public once again this spring.

We enjoyed the story of Brotton woman Rachael Conisby’s gin being named among the best in the world at a London awards ceremony.

Rachael – nicknamed Shorty – won a Bronze Award at the World Gin Awards where her own secret recipe saw her mingling with representatives from the globe’s top companies.

Way to go, Rachael! There’s more from Teesside Live below.

One for you gin lovers to try https://t.co/HA7RbBBRXD

How’s this for exciting contract news for a Redcar | Cleveland business? Skippers Lane-based ERW has been commissioned to revamp hundreds of original windows as part of a project to redevelop a historic building in Manchester.

The Grade-II listed London Road Fire Station is being transformed into business and residential premises.

Find out more on the Tour de Yorkshire

The Tour de Yorkshire comes to Redcar | Cleveland in less than three months and the build-up ramps up a notch in the coming weeks with a series of community roadshows along the route.

Local people, businesses and community groups can ask questions about what will happen on 30 April and find out more about the competitions that can be won. We expect some serious challenges for the Best Dressed town/village award from our area!

Events are confirmed in Brotton, Loftus and Redcar with details on roadshows in Saltburn and Marske due very soon.

There are more details on the dates and how to sign up here. 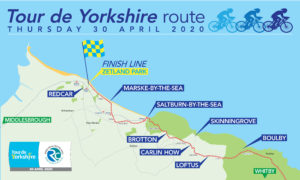 And finally, can you lend us a hand next Friday?

On 7 February we’re holding a winter sign-up day as part of our ongoing aim to increase the number of Redcar | Cleveland Ambassadors. It would be amazing to hit 500 Ambassadors soon – your help is really appreciated.

Remember that signing up is quick, simple and free. You can complete the process in a couple of minutes here.